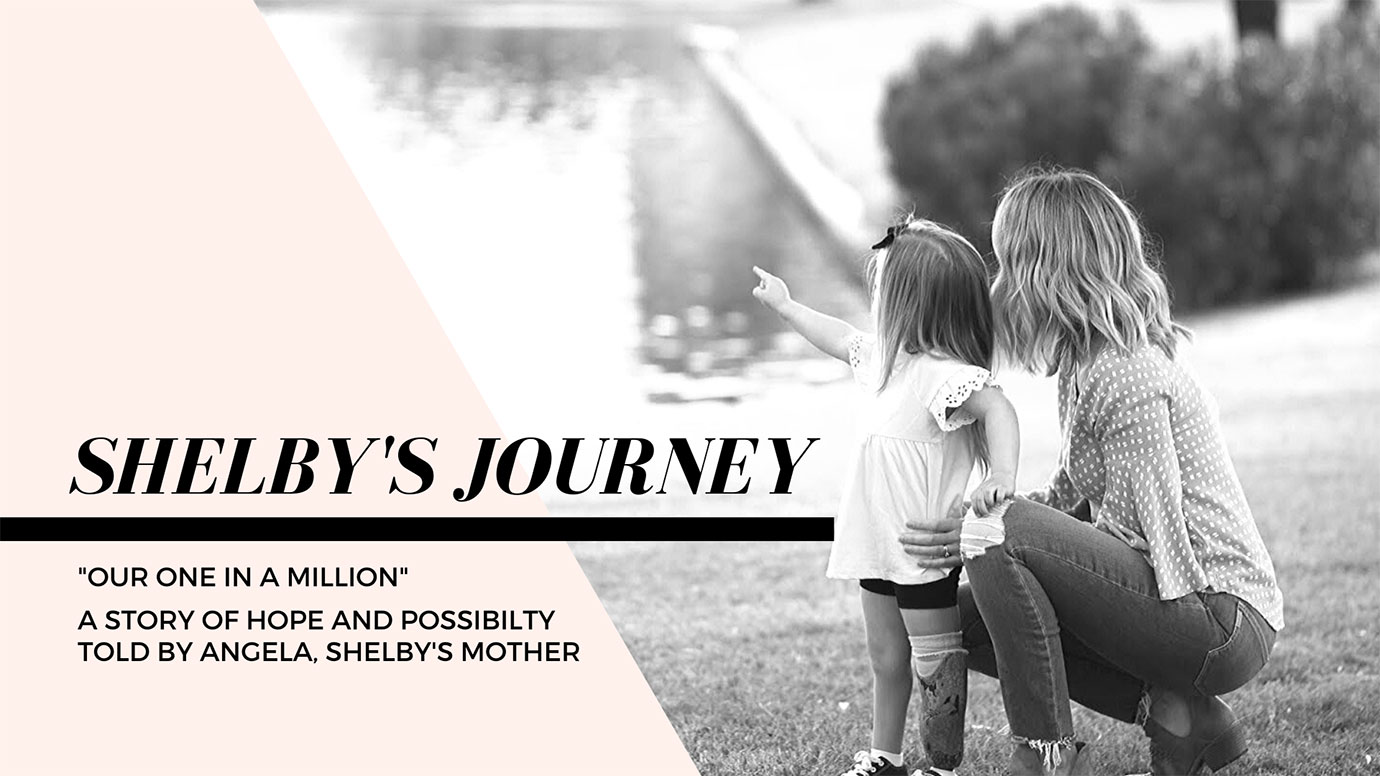 Every family looks forward with anticipation to the arrival of a new baby, planning what they will do or learn or be. Sometimes, what we anticipate changes, and we learn to adapt to a new way of living, loving, and being over time. This is Shelby’s story.

On December 30, 2016, a beautiful, healthy, baby girl arrived in our family. We named her Shelby. Prior to her birth, there had been no indications of any difficulties, so we had no idea of the changes that were yet to come

Shortly after Shelby’s birth, we noticed there was something amiss with her feet. The doctors at the hospital indicated that it looked like clubfeet and recommend that we see a pediatric orthopedic specialist. Not knowing much about clubfeet at the time, we went forward believing it to be a correctable condition. So, at ten days-old, we met with a specialist at Cardon Children’s Hospital in Mesa, AZ.

The specialist who examined her feet indicated that her right foot was in fact a clubfoot; however, her left leg had a bit more going on. After a few x-rays were performed, the specialist shared with us that Shelby’s left leg had a limb deficiency call Tibial Hemimelia*. In Shelby’s case, her tibia bone started growing from the knee down and stopped about a third of the way down - incomplete. Unfortunately, there was not a developed ankle joint to support her perfect little foot.  [*Tibial Hemimelia is a very rare condition that only occurs in 1 in a million children.]

The specialist kindly discussed both the corrective action for her clubfoot and the options for tibial hemimelia. To correct her clubfoot, Shelby would be required to undergo 6 weeks of serial casts to alter the position of her foot and ankle bit by bit, followed then by surgery on her Achilles tendon and 3 additional weeks in a cast. After the series of casts was completed, and in order to keep Shelby’s foot in the corrected position, she had to wear a special brace 23 hours a day for four months. Shelby will also have to continue wearing her brace at nighttime while she sleeps until she’s five years old.

While discussing the Tibial Hemimelia, the first thing the specialist brought up was amputation. When the word amputation was mentioned, our mouths flew open and our hearts just dropped. The fear and helplessness that went through us that day was unreal! We were wondering why this was happening to us and to our precious Shelby! Had we done something wrong? What could have been done differently during the pregnancy or before? Words cannot adequately describe the range of emotions that surged through us!

The next option discussed was limb lengthening, which would consist of 10+ surgeries throughout her childhood and has no guarantees of being successful. This would delay Shelby’s walking, running, playing, and just being a kid. The whole process of delay and setback was just something that did not set well with us.

After seeking for and receiving a second opinion from a specialist at the Phoenix Children's Hospital, and after carefully weighing the pros and cons, we decided that amputation would give Shelby the best possible opportunity for a normal life.

Shelby's Doctor at Phoenix children's hospital recommended that we first go to Hangers Clinic in Phoenix, where we would be provided with her ADM brace for right clubfoot and the instruction needed for both the type and use of the prosthetic that Shelby would be receiving. The people at Hangers Clinic were just amazing! They kindly and professionally answered all of our questions with sensitivity to ours and Shelby’s individual circumstances.

On October 16, 2017, Shelby had her amputation surgery at the Phoenix Children's Hospital. The Doctor performed a procedure called a ‘Symes Amputation’, which is a below the knee amputation. Her surgery took about 3 hours, we stayed overnight, and Shelby was able to be released the very next day. She was in a Spica cast for 5 weeks, which protected her limb during healing. She was fitted for her first prosthetic on December 7, 2017, then, a week prior to Shelby’s first birthday, she received her individually crafted prosthetic!

To help her adapt to the prosthetic, Shelby had three months of physical therapy. By March 17, 2018, Shelby was able to take her first unassisted steps! By 15-months old, Shelby was officially walking all by herself and we have been chasing her ever since!

Moving to the present day, Shelby is on her third prosthetic as they are altered for size and length as she grows. She is able to run, jump, ride her balance bike, and is loving her gymnastics class! She is our little superstar! We are so proud of how she is handling her journey. We will always let her take the lead, and where she goes, we will follow.    Shelby truly IS our “One in a Million!.”